Scaling blockchains by reducing the concurrency across token transactions.

The increasing popularity of decentralized applications has motivated prominent efforts (like ETH2) towards improving the scalability and performance for blockchains. In this context, research on distributed protocols plays a major role: many new proposals have emerged to scale the throughput of a blockchain platform, giving rise to a plethora of different distributed ledgers today. A common objective of these proposals is to ensure that blockchain nodes execute all transactions in the same order, using the replicated state-machine approach where a broadcast protocol forms chain of transactions:

This process is often referred to as “consensus”, which is equivalent to total-order broadcast. Since reaching consensus is expensive, it is important to understand where it may be avoided without losing consistency.

For investigating concurrency, one usually considers two distinct models: message-passing and shared memory. In the message-passing model, processes do not have any shared state and communicate with each other via messages. Processes in the shared-memory model, however, operate on the same data, which they access concurrently. Despite these differences, results in one model can be transferred to the other one. The gist of a synchronization problem in a distributed system using message passing is often more clearly expressed by the corresponding shared-memory formalization.

Shared-memory abstractions are objects, which provide operations to processes. The simplest such object is a register. It only offers operations for reading and writing a single value. An important object is consensus, which implements agreement on a value; it provides a single operation, called propose. All processes may concurrently invoke propose and add their own proposed value as argument. Every process may do this at most once, however. Upon completion, the operation returns a decided value, which is one of the proposed values. 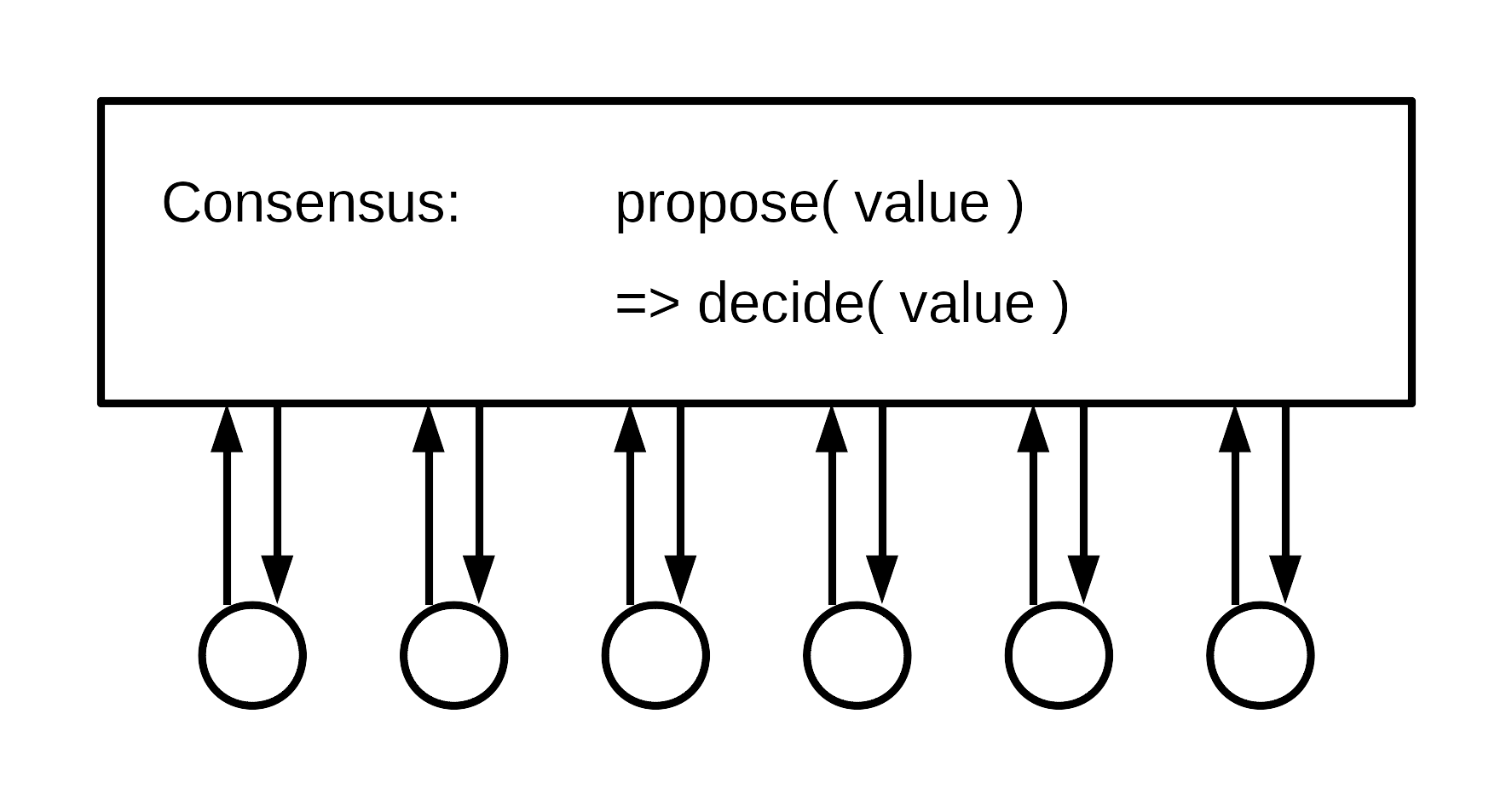 Guerraoui et al. propose a shared-memory abstraction for asset transfer as implemented in Bitcoin, and they show that this requires only a minimal level of synchronization. Specifically, they prove that asset transfer has consensus number 1 in the wait-free hierarchy. Their result suggests that current implementations may be sacrificing efficiency and scalability because they synchronize transactions much more tightly than actually needed. For cryptocurrencies that support shared accounts with up to k owners, Guerraoui et al. introduce a k-shared asset transfer (k-AT) object and show that it has consensus number k, which is as powerful as consensus among its k owners. Going beyond their theoretical elegance, these results are of great practical interest because they pave the way to consensus-free implementations of cryptocurrencies.

Modern blockchains support a variety of distributed applications realized by smart contracts. These applications go far beyond cryptocurrencies and decentralized payments, as initially envisioned by Bitcoin. Smart contracts enable a blockchain to execute arbitrary programs in a fully decentralized fashion, akin to a world computer. Introduced by Ethereum, smart contracts come in many different flavors and are the key element in most decentralized finance (DeFi) projects today. Smart contracts represent value using tokens. These are blockchain-based assets which can be exchanged across users of a blockchain platform. Ethereum’s Request for Comment (ERC) 20 defines a blueprint for the creation of a specific type, dubbed ERC20 token, one of the most widely adopted tokens on Ethereum. The ERC20 standard provides functions for handling tokens over Ethereum, allowing users to own and exchange goods such as digital and physical assets. It formulates a common interface for fungible tokens and has become the most widely-deployed API for implementing a token functionality: More than half of the overall transactions on Ethereum are ERC20 token transfers.

In recent work, which will be published at ICDCS 2021, we investigate the synchronization power of smart contracts on Ethereum, and in particular that of token contracts. We present an abstraction of a token object that captures and generalizes the functionality of an ERC20 contract.

ERC20 is considerably more flexible than the transaction model in Bitcoin. The additional features of ERC20 make it possible, for example, that account owners allow other users to interact with their accounts and issue transfers on their own. 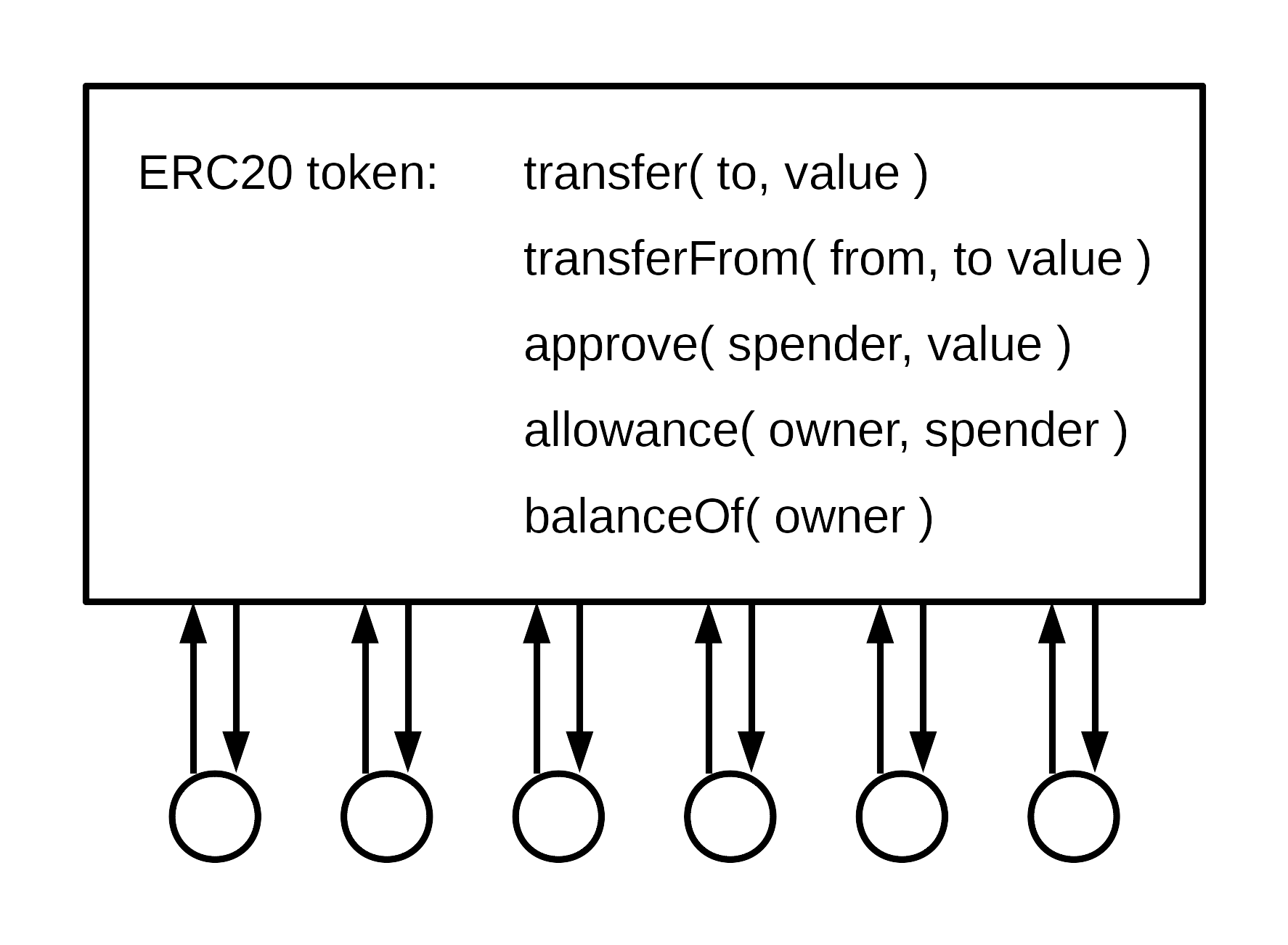 Likewise, the ERC20 token object is strictly more powerful than k-AT because account owners may approve other spenders to transfer tokens. An owner may approve new spenders flexibly, at any time, and for arbitrary amounts. This results in a dynamicity that has no counterpart with k-AT. Because of these differences, the results established for k-AT cannot be lifted to ERC20 tokens. What crucially distinguishes an ERC20 object from k-shared asset transfer is the increased level of dynamicity, which is reflected in its synchronization requirements. Namely, the consensus number of ERC20 tokens depends on the number of approved spenders for the same account, which may change as the account owner enables more spenders.

Our research shows that synchronization among a dedicated subset of nodes participating in a blockchain is enough for building prominent applications. ERC20 require consensus only among the largest set of enabled spenders for an account; importantly, the exact synchronization requirements can be readily deduced from the current object’s state by reading the current balances and allowances. Thus, not all transactions require synchronization and many can run concurrently. This leads to a graph with parallel transactions that offers higher throughput: 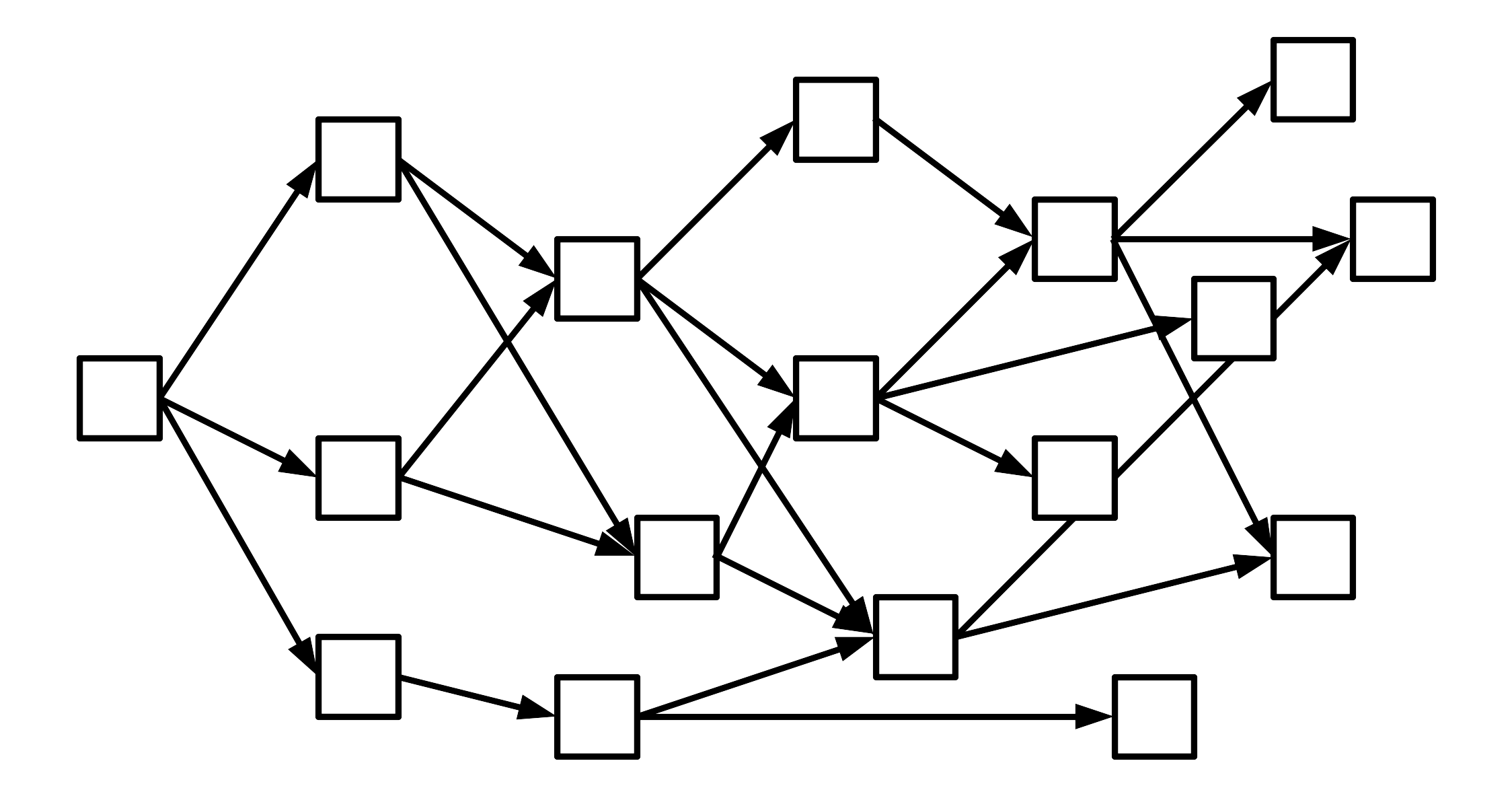 Our insights open up the possibility to deploy realistic smart contracts, such as ERC20 tokens, on more scalable and performant protocols than consensus-based blockchains.